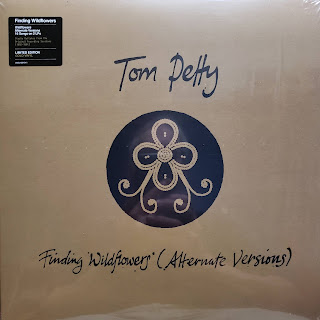 The tracks, which were previously released on the limited-edition Super Deluxe 9-LP and 5 CD formats of 2020’s Wildflowers & All The Rest, will now be available on limited edition gold vinyl (exclusive for TomPetty.com and indie retail) for the first time.

Finding Wildflowers (Alternate Versions) features 16 studio recordings of alternate takes, long cuts and jam versions of Wildflowers songs as Tom, band members and co-producer Rick Rubin worked to finalize the album in 1994. The release offers fans further deep access into the writing and recording of Wildflowers, as well as realizing the full vision of the project as Tom had always intended.

The collection was produced by Tom’s longtime engineer and co-producer Ryan Ulyate who listened to 245 reels of 24-track tape, revealing Tom and his collaborators’ evolutionary process and finding the group willing to do whatever it took to discover the essence and magic in the material.

Notes from Discogs and hype sticker: 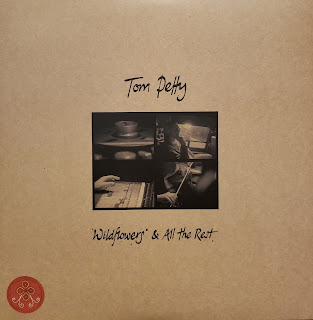 I have a CD copy of the original 1994 release. Good luck trying to find a copy of the original LP. I saw one once in a Toronto record store for $400 a couple of years ago. I wasn't even tempted. There was, evidently, a double LP version released in 2009. I had no idea. Finally, In 2002, we got a bunch of reissues, like a double CD version, a 4 CD version, a 3 LP version, and some boxes with six records (I think). I settled for the triple record version. From Wikipedia:

"Petty's original track listing for Wildflowers was a double album with 25 songs and Lenny Waronker of Warner Bros. Records suggested that it was too long. Petty's family and bandmates arranged a 2020 re-release of the album that includes these deleted songs, demos, and live tracks entitled Wildflowers & All the Rest. The super deluxe edition of the box set called "Finding Wildflowers" included a fifth disc of alternate versions of the Wildflowers tracks. In April 2021, "Finding Wildflowers" was released individually." [source]

Email ThisBlogThis!Share to TwitterShare to FacebookShare to Pinterest
Labels: music, records, tom petty, vinyl, wildflowers, wildflowers and all the rest 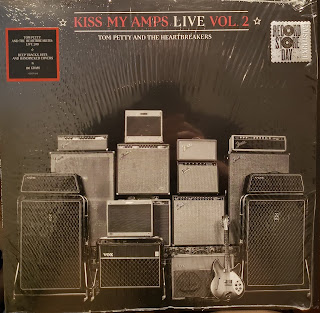 This is an RSD 2016 release that was limited to 7500 copies. From the sticker: Tom Petty And The Heartbreakers Live 2013; Deep Tracks, Hits and Handpicked Covers.
I like it. 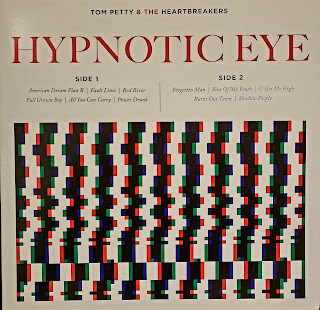 Sadly, this was the final Tom Petty studio album. This is a great record, right form the fist note of the first track. It's too bad that there will never be another Petty record of new material.
"Ultimately, Hypnotic Eye is a record about the pure joy of sound, a rush that doesn't lessen upon repetition -- a sentiment that's true of those old '60s garage rock singles and early Heartbreakers albums, and this is a surprisingly, satisfyingly vigorous record." [source] 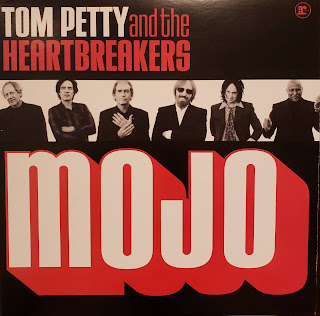 "Mojo is the 12th studio album by American rock band Tom Petty and the Heartbreakers, released on June 15, 2010 on CD and June 29 on Blu-ray. It was Petty's first album with the Heartbreakers in eight years."
- Wikipedia
This was repressed in 2017, but I have a copy of the original pressing for 2010. Oddly the prices for each are similar. The reviews are all over the place, but I think this is a good record. I mean, it starts with a killer track: 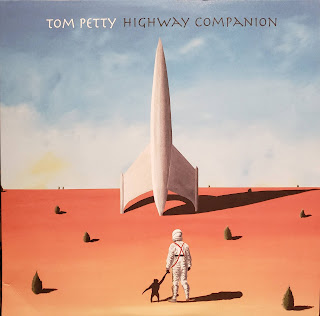 I am the lucky owner of an original pressing from 2006. More than that, I paid $8.00 for a sealed copy! Wow. At the time I picked his up, this record was going for at least $80 to $100 on Discogs, and some were listed at even higher prices. I believe that current prices are similar. In 2017, the record was repressed and that record sells for far less. My copy has a slightly bent corner, from shelf wear, but I am not too upset about that. I really like this record. 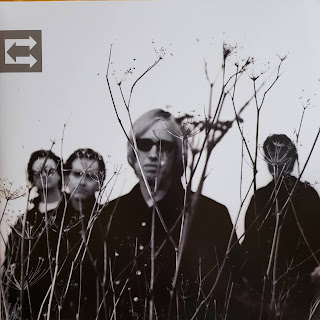 The original LP, released in 1999 is now a pricey record. The record was repressed in 2017, and I picked up a used copy for a good price. Resale prices for the repressing are creeping up. I think this is a pretty good record.

Tom Petty And The Heartbreakers: She's The One - Songs And Music From The Motion Picture (1996/2017) 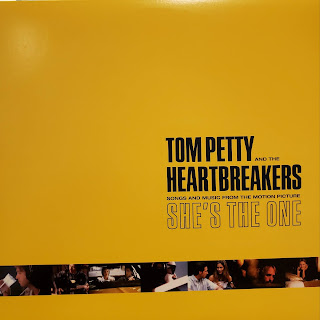 Though originally released in 1999 the first (and only, so far) vinyl release dropped in 2017. Surprise: I have never seen this film. Walls is likely the track you have heard, if you have heard any tracks from this record.

Tom Petty & the Heartbreakers: Into the Great Wide Open (1991) 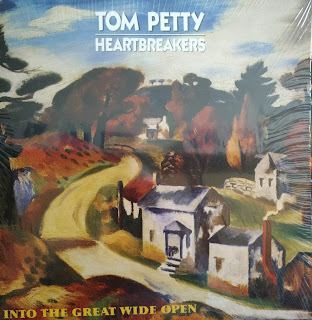 I think every musical artist has considered the problems of following up a great record. How do you top or match a really fine LP? In this case, if you are the critic at Allmusic, you just pretend that Petty failed. But, that is selling this record short. Jeff Lynne came back to lend a hand and the results are really good, but perhaps not as good as FMF. Into the Great Wide Open is one of my favourite Petty tunes. I love Learning to Fly. Two Gunslingers is great too, as is The Dark of the Sun, All or Nothin', etc.

Among the long list of people Petty thanks, is--first and foremost--God. Really? Why include a thanks to a fictitious supernatural agent? People are so gullible. 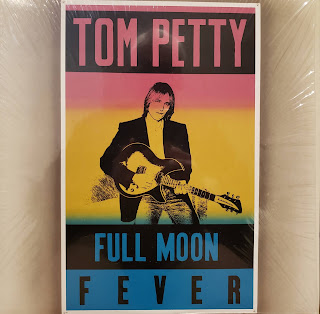 Full Moon Fever might be Tom's best record. The only song I do not care for is Alright for Now. The rest are all top-shelf tracks, including--arguably--Petty's best song, Free Fallin'. I've never been a big fan of ELO or Jeff Lynne, but this collaboration works amazingly well. Just reflect on what else is on this record: I Won't Back Down, Running Down a Dream, Love is Long Road, Yer So Bad, Feel a Whole Lot Better, etc., etc. It's almost a greatest hits record.

I wasn't really a Tom Petty fan when this record came out. In fact, I had forgotten about him, after having been infatuated with Damn the Torpedoes. After that record, I completely lost track of him. One day, I heard Free Fallin' and I was stopped dead in my tracks. It is one of those songs that just grabbed my attention. As soon as it was over, I wanted to here it again. I went on a quest to reconnect with Petty because I thought Free Fallin' was such a great song. I think that is is one of those songs that everyone who hears it will like, even if you are a classic rock guy, or a country music fan, or even a fan of indie rock. I'd really like to meet someone who does not like that song. 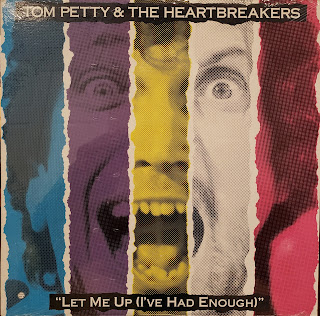 This record sure got mixed reviews. I will say this: the cover is an abomination. It is absolutely horrible. Why this was cover ever allowed to see the light of day is beyond me. I hate to even look at it. It probably induced nightmares in many people. From a post about this record on Discogs:

It’s quite impossible to begin talking about this release without referencing one of the most uncomfortable album covers that ever existed, and then go onto think about the photographer needing to ask each member of the band to scream in front of the camera in order to create this uninspired feature. [source]

Anyway, I don't hate this record, but it is not in the top five. 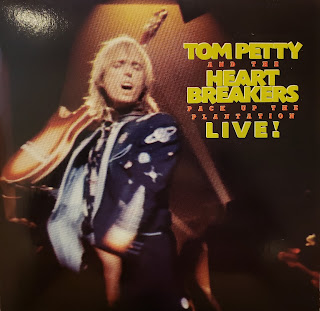 This is a double live Tom Petty record that is petty good, though Allmusic awards it a measly 2.5 stars.