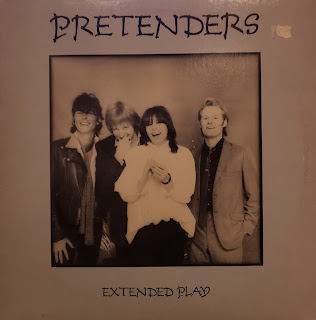 Sorry for the truly terrible photo. Did I mention that I love this band? 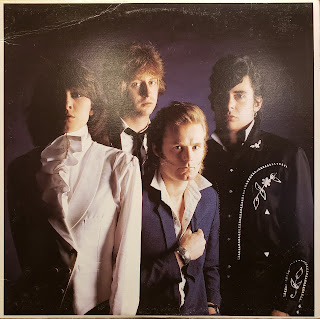 No one had to convince me to buy the second Pretenders LP. This is a great record, and only a little less great than the first. These two first records are incredible. 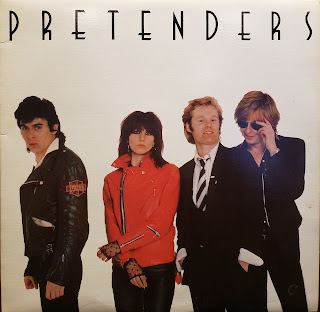 "I was a good time, yeah, I got pretty good
At changing tires upstairs bro
I shot my mouth off and you showed me what that hole was for" (Tattooed Love Boy)

If you don't know what "changing tires" means, just remember that tires are made of rubber. That might seem tame by today's standards, but back in '80, this was powerful stuff. I think I sprinted to the record store to pick up this record. This album also has two huge hits: Stop Your Sobbing (written by Ray Davies) and Brass in Pocket.

The debut record is a new wave, pop, punkish masterpiece, and definitely one of my favourite records of all time. I do like what Allmusic said about this record:

"It's a deep, rewarding record, whose primary virtue is its sheer energy. Pretenders moves faster and harder than most rock records, delivering an endless series of melodies, hooks, and infectious rhythms in its 12 songs. Few albums, let alone debuts, are ever this astonishingly addictive." [source]

And so began my adolescent crush of Chrissie Hynde, which persisted along side of my crushes on Joan Jett and Pat Benatar. 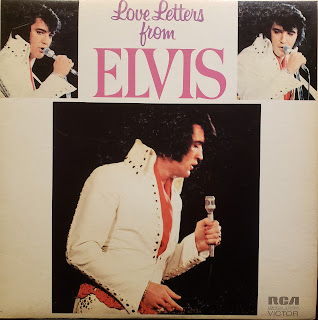 Love Letters is the man's 14th record. From Wikipedia: "The album was critically panned upon release, and failed to crack the top 20 of the Billboard album charts but did reach No, 12 on the US Top Country Albums chart and No. 7 on the UK best-selling albums chart."

Evidently, the tracks were leftovers from a previous recording session. I am not even sure if I have ever listened to this. 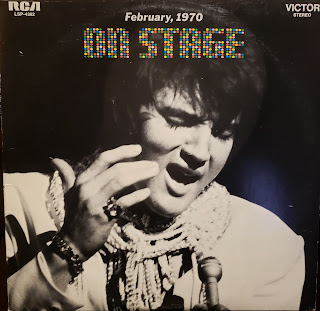 I have an original Canadian pressing from 1970. From Wikipedia:

Country music charts! What? And, also: "Unlike the previous release, however, this album focused on songs that were not, at the time, associated with Elvis."
I m not sure that I have ever listened to this record. I am not even sure where I got it. How is this country music? 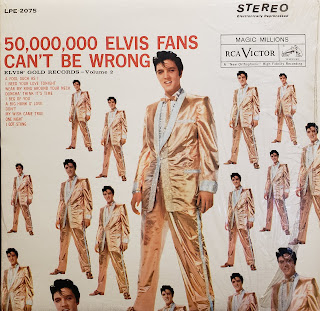 Although originally released in 1959, I have a copy from 1978 that is still in shrink wrap. It's in excellent condition. I am not a huge Presley fan. My brother was a fan, though (but really only once Elvis died), and so we had lots of Elvis records, but then he gave them away or lost them or they were stolen. Who can say? Obviously, this record is a compilation.

About that title, Wikipedia says:

There has long been some confusion over the actual title of this album. The title is shown on the original record's labels as "Elvis' Gold Records, Vol. 2," with a comma and an abbreviation of "Volume", but on the jacket, it appears as "Elvis' Gold Records – Volume 2". The phrase "50,000,000 Elvis Fans Can't Be Wrong" does not appear on the labels on any of the original records, and it is the title of the records on the labels—not the jacket—that is usually given preference when conflicting titles appear on albums. Therefore, the phrase was not part of the original title of the album. Beginning no later than 1962, RCA Victor added "50,000,000 Elvis Fans Can't Be Wrong" to the labels of a few mono records and to the then newly released "electronically reprocessed stereo" records. The boasting on the label appears nearly exclusive to records manufactured at RCA Victor's Hollywood pressing plant; copies pressed at the other plants tended to use the proper title only. The '50,000,000' phrase remained there for several years, but by 1968, it was removed from the new orange RCA labels and was not found on any record labels for years afterward, but then it was added (again), this time to the compact disc releases of this album, where it has remained

There is not much else to say, really. 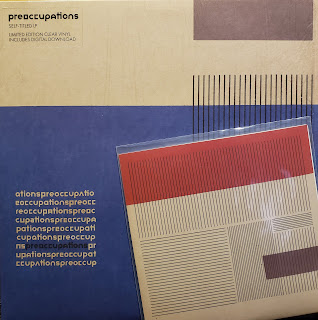 The woke brigade got this band. Ultimately I think it's better that they opted to change the name of the band from Viet Cong to Preoccupations. But, shouldn't the market dictate things like this? I mean, if the name is so offensive, won't people stop supporting them? Well maybe not. From Wikipedia:

The band frequently faced controversy over their original name, involving accusations of both racism and cultural appropriation because of the name's association with the original Vietnamese Viet Cong. In March 2015, the band was set to perform at Oberlin College, but the show was cancelled due to their "offensive name".

In September 2015, the band announced that they were going to change their name, posting to their Facebook page, "We are a band who wants to make music and play our music for our fans. We are not here to cause pain or remind people of atrocities of the past". On March 29, 2016, the Canadian music magazine Exclaim! reported that the band were still booking shows under the name Viet Cong, and began running a real-time "Days since Viet Cong promised to change their name" counter on the magazine's website.

I have some sympathy because I am sure they would have lost some momentum with the name change, but maybe they also gained some fans who knew nothing about them previous to the kerfuffle? My copy is the limited edition pressing on clear vinyl that was packaged with a bonus 7' single. 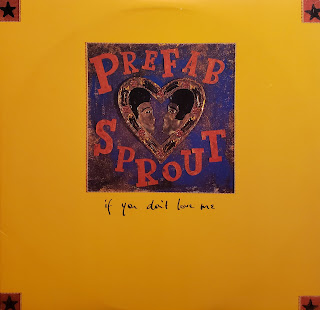 It's really difficult to listen to this from start to finish, because it has 5 versions of the same tune:

If You Don't Love Me (Extended Mix)

If You Don't Love Me (Deep Field Mix)

If You Don't Love Me (Stateside Swamp Mix)

If You Don't Love Me (Dubbish Mix)

Email ThisBlogThis!Share to TwitterShare to FacebookShare to Pinterest
Labels: if you don't love me, music records, prefab sprout, vinyl 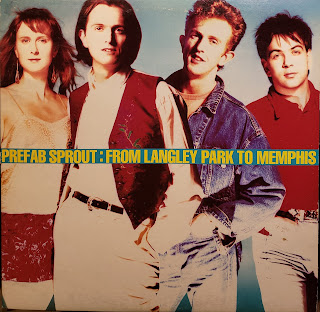 My kids love two of the tracks on this LP. Amazing! They usually hate my music. This is the third record from the band. They release five singles from this record! Were they trying for a Born in the USA? 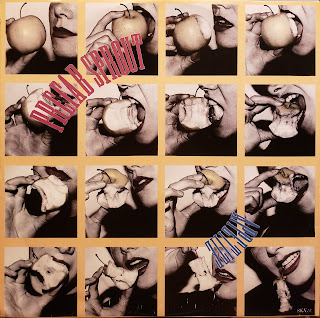 There are three tracks to found on this UK pressing: Appetite, Heaven Can Wait (Instrumental Version Of When The Angels), and Oh, The Swiss! Cool. 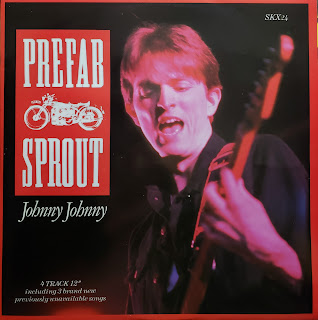 On the LP Two Wheels Good, this track is known as Goodbye Lucile #1. On the 12" single, the track is renamed Johnny Johnny (Full Version). It's bizarre, but I guess it makes sense. After all, the name Lucille is not mentioned anywhere in the song, while Johnny is named maybe 40 times. The other three tracks were new and unreleased. They are Wigs, The Guests Who Stayed Forever, and Old Spoonface is Back. 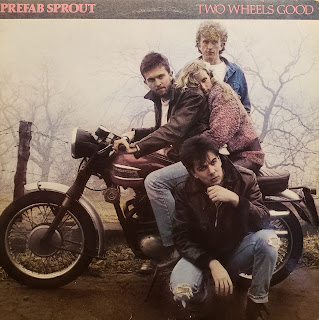 Sometimes, Discogs has good information. For example, I never knew, until I looked up this record on Discogs (when I added my collection to Discogs some years ago) why this record was entitled Steve McQueen all over Europe as well as in New Zealand, Israel, Japan, and Australia. In North America, we got the title Two Wheels Good. Discogs has an answer:


The album "Steve McQueen" was released in North America as "Two Wheels Good" due to a legal conflict with the estate of American actor Steve McQueen.


The album cover references Steve McQueen's lifelong passion for Triumph motorcycles and the 1963 film The Great Escape, starring McQueen and featuring prominent motorcycle chase scenes (with stunts performed by himself on a Triumph motorcycle). [source]

I hated the song When Love Breaks Down the first few times I heard it, and for years after. But one day I heard it, and thought, hey this is pretty good. It turns out that the album is simply beautiful. I suppose I should have liked it more initially, because it was produced by Thomas Dolby.