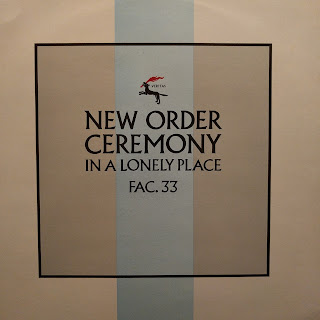 As most people know, New Order rose from the ashes of Joy Division, after the untimely and tragic suicide of lead singer, Ian Curtis, in 1980. I'm always left to wonder what would have become of the band had he not taken his own life. Could they have sustained such a brilliant output? It's a question with no answer.

New Order's first single was released in March 6, 1981 (a few months before Movement), with subsequent repressings following. Figuring out which version one has is a little challenging, as you can tell from this summary on Discogs:

"New Order's first single after renaming the band from Joy Division to New Order. Originally recorded and played by Joy Division, it was re-recorded at Eastern Artists Studios, New Jersey. Produced by Martin Hannett and with Bernard Sumner on lead vocals. All covers were designed by Peter Saville.

The 7" and first 12" were released on 6 March 1981. While the 7" record has a stamped gold-bronze sleeve, the 12" sleeve comes with gold typography on a forest green background.

After Gillian Gilbert joined the band, it was decided to re-record the song with her on guitar. It was then re-released in September 1981. This time the cover had a cream background with a light blue stripe and black type. This second version was included on all later compilations, e.g. Substance 1987.

There are two different editions of the record using the green sleeve:
1) Original version of "Ceremony" (without Gillian Gilbert). The runout-groove space is 3,6 cm (side A) and 3,4 cm (side B).

2) Re-recorded version of "Ceremony" (with Gillian Gilbert). Side A etching: "This Is Why Events Unnerve Me". This version of the record was also released in the new cream & blue sleeve, but there were green sleeves left over from the original pressing which were used rather than being discarded. Although the centre labels have the date 22/1/81 as part of the artwork, this release came out in March.

For the second cover, there were four different versions released:
The 1st version with track groove filling the entire side of the record. Side A groove etching: "This Is Why Events Unnerve Me". This version of the record was also released in leftover copies of the original green sleeve.

The 2nd version, being the original version of "Ceremony" (without Gillian Gilbert). The runout groove space is ~3,5 cm on each side. Side A groove etching: "Watching Love Grow - Forever". This is basically the same as the original version that was released in the green sleeve.

A 3rd version, with track groove filling the entire side of the record. Side A groove etching: "This Is Why Events Unnerve Me", with an A2 matrix rather than A1.

Then there is a 1984 repress with track groove filling only part of the record. Side A groove etching: "This Is Why Events Unnerve Me".

The B-side track "In A Lonely Place" is the same version on all the cream and blue releases. However, the track was altered as well: the digital thunderclap sound in the final bars of the track occur at different times to the first edition"

I have the 2nd repress from 1983, obviously in the cream and blue sleeve. This is really a transitional record, because both tracks were written by Joy Division. Ceremony, of course, was performed live toward the end of the band's career. The most famous live version is probably the version that appeared on the second disc of Still. The recording was mangled, but the direction the band was taking is clear.

Somewhat bizarrely, New Order chose not to put Ceremony on Movement. It's a powerful song, perhaps the band's best, and I wonder why it was omitted.

This is why events unnerve me,
They find it all, a different story,
Notice whom for wheels are turning,
Turn again and turn towards this time,
All she asks the strength to hold me,
Then again the same old story,
World will travel, oh so quickly,
Travel first and lean towards this time.

Oh, I'll break them down, no mercy shown,
Heaven knows, it's got to be this time,
Watching her, these things she said,
The times she cried,
Too frail to wake this time.

Oh I'll break them down, no mercy shown
Heaven knows, it's got to be this time,
Avenues all lined with trees,
Picture me and then you start watching,
Watching forever, forever,
Watching love grow, forever,
Letting me know, forever.